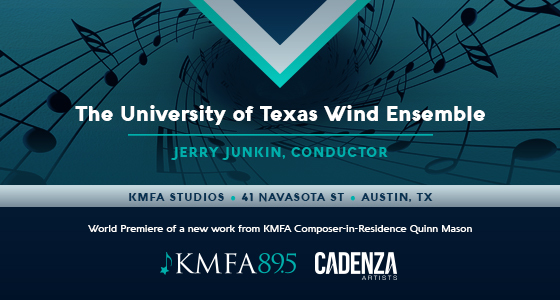 KMFA Classical 89.5 will wrap up the first year of its Composer-In-Residence program in October with the final two world premiere pieces commissioned by rising composer Quinn Mason. The final premiere will take place later in the month with Inversion Ensemble at the Draylen Mason Music Studio. Details on that concert can be found here.

The first piece titled The Sky Searching Within Itself will be premiered on Friday, October 7, at an exclusive concert for KMFA members in the Draylen Mason Music Studio. The work will be performed by a Wind Chamber Ensemble from the University of Texas Austin’s Butler School of Music under the baton of conductor, Jerry Junkin. The Friday concert will also include a performance of Hila Plitmann's In This Circle in a chamber arrangement by Christopher Dickey.

The Sky Searching Within Itself

By invite only to KMFA members

*Make a contribution in any amount to KMFA. In your confirmation email, you will receive a registration link to attend the event. Space is limited and seats are available on a first come, first served basis.

The public will have an opportunity to see the piece as part of a larger concert with the full Wind Ensemble on Sunday, October 9, at 4:00 p.m. at Bates Recital Hall on the UT campus. The Sunday program will also include Mason’s A Joyous Trilogy, along with Katahj Copley’s Dope, and another world premiere piece by Hila Plitmann titled In This Circle.

Featuring Quinn Mason’s The Sky Searching Within Itself

and Hila Plitmann In This Circle

The University of Texas Wind Ensemble is one of America’s elite wind bands. Commissioning new music since 1988, the group has offered world premiere performances of works by composers such as John Corigliano, Michael Daugherty, Donald Grantham, David Maslanka, and Omar Thomas.

In addition to serving as noted educators and conductors, graduates of The University of Texas Wind Ensemble hold major positions in each of the Washington D.C.-based military bands as well as major symphony orchestras throughout the world.