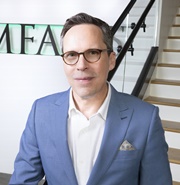 A multi-faceted programmer and announcer now in his third decade in radio, KMFA's Director of Broadcasting and Content Anthony McSpadden came to Austin in 2016 from Norfolk, Virginia, where he wore a couple of hats; as afternoon drive classical music host and producer for WHRO-FM, and as Program Director for its sister NPR affiliate WHRV.  A native Texan whose career began at WRR in Dallas, he hosted middays and mornings, and served as the station’s music director for ten years. Prior to his move to Norfolk in 2009, McSpadden worked for WorldSpace Corporation, the world’s first satellite radio broadcaster, which recruited him to create and develop a classical music channel – Maestro – for its network platform offerings. He was part of a groundbreaking content team that created unique programming for distribution globally to 134 countries in Europe, Africa, the Middle East, Asia, India, and parts of Australia.

Anthony has too many favorites to count and loves finding new music to share with his audience.