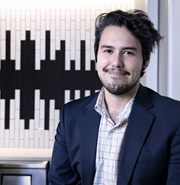 KMFA’s weekend Matinee host Guillermo Delgado is a Texas native who received his Bachelor of Music in voice performance from Stephen F. Austin State University and his Master’s degree from the University of Oklahoma. As a tenor, he has sung lead roles in operas such as Puccini’s Gianni Schicchi, Mozart’s Così fan tutte and The Magic Flute, Tchaikovsky’s Eugene Onegin, and Alexander Dargomhzkys’ Rusalka.

After teaching voice in the greater Houston area for a year, he moved to Austin to teach elementary music in Cedar Park. Recently, he has performed in concerts with the Temple Symphony Orchestra and the Georgetown Festival of the Arts.