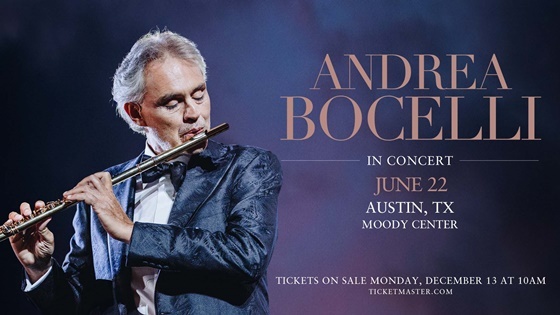 Moody Center announced today that world-renowned Italian tenor Andrea Bocelli will stop in Austin, Texas on his new US tour in June 2022. The date follows Bocelli’s current extensive 21-city Believe North American Tour, which is his largest tour to date and features Bocelli alongside some of the top orchestras in the country.

About the Andrea Bocelli Tour:

The newly announced concerts will feature performances from Bocelli’s latest album Believe, a poignant and uplifting personal collection of songs, celebrating the power of music to soothe the soul, as well as a selection of arias, his beloved crossover hits and famed love songs. The show in Austin, TX will be part of an incredible grand opening season for Moody Center, the first major arena built in Austin in over 4 decades.

As one of the most recognizable voices in the industry, and revered by fans internationally, Andrea Bocelli has been entertaining audiences for over 20 years, counting nearly 90 million records sold worldwide. In addition to his sold-out arena-sized concert events and record-breaking live-streams, Bocelli has shared his talents at many major events including the Olympic Games, the World Cup, and Global Citizen. He has earned a Golden Globe, seven Classical BRITs and seven World Music Awards, plus a star on the Hollywood Walk of Fame. His previous album, Si, reached No.1 on both the US and UK charts.