Live from the Draylen Mason 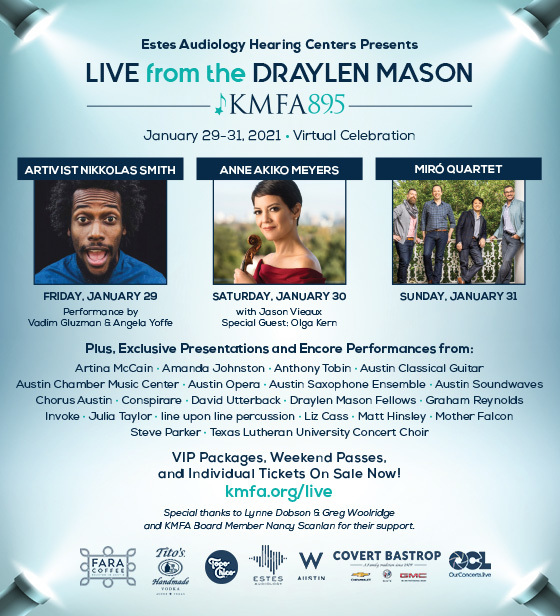 All concerts are available on-demand through Sunday, February 7, 2021.

GET UPDATES ABOUT "LIVE FROM THE DRAYLEN MASON"

About Draylen Mason and the Music Studio

The 135-seat music studio is the centerpiece of KMFA’s new facility and is named after Draylen Mason, the talented seventeen-year-old bassist who was a victim of the Austin package bombings in March 2018. Draylen performed with Austin Soundwaves, Austin Youth Orchestra, Austin Chamber Music Center, the UT String Project and at the Interlochen Center for the Arts. He had been admitted to the music schools at the University of Texas at Austin, University of North Texas and the Oberlin Conservatory of Music to study bass performance. A memorial tablet on the Walk of Heroes at Draylen’s school, East Austin Prep, shares his statement: “The greatest gift I can ever offer is to rekindle someone’s passion by sharing my talents. I want to share my gift and inspire others to discover, develop and use their own.”