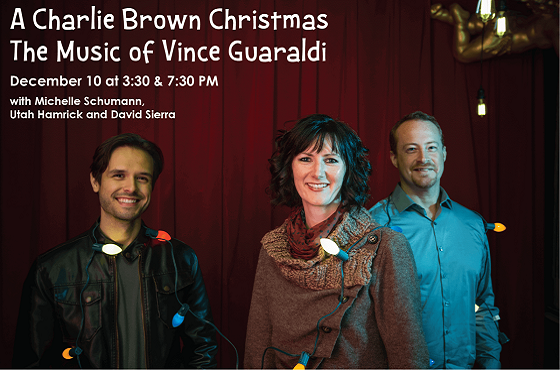 Listen to this broadcast online by clicking the "Listen Live" button at the top of this webpage or by tuning your radio to 89.5 FM on Friday, November 25 at 12 noon. This is a broadcast of a previously recorded event.

Lucy wants real estate. Sally wants tens and twenties. Charlie Brown wants to know the true meaning of Christmas (and maybe the chance to really kick that football.) To many Americans, A Charlie Brown Christmas is as vital to the holiday season as tree trimming and cookie baking. But the show nearly didn't get made because the executives at CBS had a few qualms about it. What didn't they like? Just about everything. The subject matter was too serious, they wanted professional voice actors instead of kids' voices, and then there was that score... jazz and Beethoven together? But despite their misgivings, the execs gave it a chance, and a holiday tradition was born. "The reason Vince Guaraldi's music is perfect is that it appeals to both adults and children," producer Lee Mendelson said in an interview with NPR. "It has the jazz that adults love, but it also has a childlike quality to it which made it perfect for our television shows."

Michelle Schumann, pianist and artistic director of Austin Chamber Music Center presents her yearly homage to Linus, Lucy, and good old Charlie Brown along with Utah Hamrick and David Sierra on December 10, 2016. Here's their performance of 'Linus and Lucy' as an appetizer! Merry Christmas, Charlie Brown!