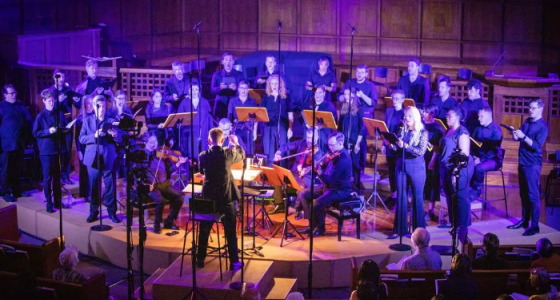 Envelop yourself in the music of GRAMMY®-winning Conspirare in an evening of choral music curated for our times by Craig Hella Johnson.

Established in Austin, Texas in 1991, Conspirare is a Grammy-winning and internationally recognized choir with a reputation for “expanding the boundaries of choral performance” (Wall Street Journal). Conspirare, which translates from Latin as “to breathe together,” is led by founder and Artistic Director Craig Hella Johnson, and is comprised of soloists from around the country. Conspirare’s extensive discography includes The Hope of Loving (Delos), 11 releases on the Harmonia Mundi label, and an annual live recording of Conspirare Christmas. The 2014 album The Sacred Spirit of Russia won the Grammy for Best Choral Performance. Conspirare’s ambitious mission is to engage the power of music to change lives. Through its artistic excellence, creative programming, commissioning, and educational endeavors, the organization has established itself as an agent of change and a bedrock of the Texas arts community and beyond.

Conspirare’s current touring project, Considering Matthew Shepard, is a three-part oratorio composed by Craig Hella Johnson. The work, which debuted at number four on Billboard’s Traditional Classical Chart, is an evocative and compassionate musical response to the murder of Matthew Shepard. The Washington Post calls the impact “immediate, profound and, at times, overwhelming.” The album received a Grammy nomination. Conspirare debuted Considering Matthew Shepard in Austin in 2016.

Conspirare has commissioned works from composers including David Lang, Tarik O’Regan, Jocelyn Hagen, Donald Grantham, Eric Whitacre, Nico Muhly, Mark Adamo, Robert Kyr, Jake Heggie, Kile Smith, Andrea Clearfield, Jake Runestad, and Eric Banks. A commitment to new music and willingness to showcase a broad context through diverse programming is evident from the first recording in 2004. Through the Green Fuse features a Gaelic hymn, African-American spirituals, and works by Sibelius, Stephen Foster, Eric Whitacre, among others. Through the Green Fuse was followed in 2006 by Requiem (works by Howells, Whitacre, and Pizzetti) which received two Grammy Award nominations. In 2008, Threshold of Night (music by Tarik O’Regan) also received two nominations, including Best Classical Album. The 2009 PBS television special “A Company of Voices: Conspirare in Concert” received the Grammy Award nomination for Best Classical Crossover, and Pablo Neruda: The Poet Sings was nominated for Best Choral Performance in 2016. Conspirare’s “astonishing” (Bay Area Reporter) 2012 recording of works by Samuel Barber includes two new arrangements for chamber choir and orchestra by Robert Kyr. In Europe, Harmonia Mundi’s re-release of Requiem in 2009 won the Netherlands’ prestigious 2010 Edison Award. In 2015, Path of Miracles was awarded the Preis der Deutschen Schallplattenkritik in Germany. Conspirare represented the U.S. at the Eighth World Symposium on Choral Music in Copenhagen in 2008, joining invited choirs from nearly 40 countries. In 2012, the group was invited to France for six performances at the Polyfollia Festival and a public concert in Paris. In 2016, the Olavsfestdagene festival, in Trondheim, Norway, presented the group in a collaboration with the internationally acclaimed ensemble Trondheimsolistene.

Conspirare has performed throughout the U.S., including appearances as a featured choir at the American Choral Directors Association annual conference and regional ACDA conventions. At home, Conspirare performs a full annual season in Austin and Central Texas where it has received ongoing recognition from local organizations and critics, and Artistic Director Craig Hella Johnson was named Texas State Musician. The group is also committed to an ongoing outreach program which includes free community Big Sings and performances at Travis County Correctional Facility. In 2013, Conspirare became a Resident Company of Austin’s Long Center for the Performing Arts. Conspirare is a growing organization, and while known for the flagship vocal ensemble, the organization also boasts the Conspirare Symphonic Choir (a large auditioned ensemble that performs works for chorus, often with instrumental ensemble).