THE DEMON BARBER OF FLEET STREET 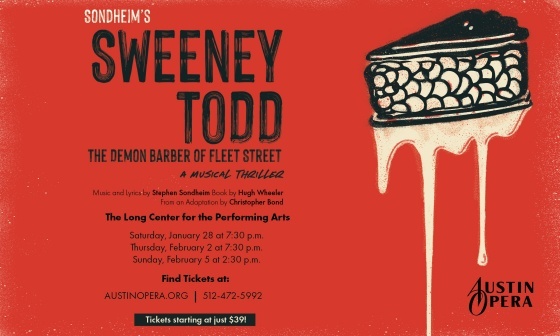 Attend the tale of Sweeney Todd . . . the dark and brooding, yet sharply comic, story of love, revenge, and meat pies. In his multiple-Tony-Award-winning musical, the late and much-beloved Stephen Sondheim created what Washington Post classical music critic, Anne Midgette, calls “the great American opera of the late 20th century.” At the broken heart of the story is the wrongly exiled barber, Sweeney Todd, as he returns to London to seek revenge on the lecherous Judge Turpin who ruined his life and destroyed his family. When Todd reunites with the ever-resourceful and ever-unscrupulous Mrs. Lovett, the owner of a local pie shop, his razor-sharp need for vengeance soon supplies Mrs. Lovett with as much meat as she needs for her new and highly popular range of delicious meat pies. But Sweeney’s desperate hunger for revenge cannot be satiated by a meat pie, however tasty.

Wielding his ruby-dripping razors as Sweeney Todd will be bass Kevin Burdette, who audiences will remember climbing the slopes of Everest in January 2020. Grinding up the worst type of mystery meat will be Grammy-winning soprano, Mela Dailey, as Mrs. Lovett, making her long-awaited return to Austin Opera since The Manchurian Candidate in 2016. Baritone Mark Diamond (Lauren + Mark Digital Concert Event) makes his live production debut as Anthony. Making her Long Center Season debut is Raven McMillon as Johanna. Raven last appeared in Austin Opera’s The Impresario, December 2020.

Wielding a searing baton, rather than a blood-soaked razor, is Sarah and Ernest Butler Principal Conductor & Artistic Advisor, Timothy Myers as Doug Scholz-Carlson directs this blood-chilling and darkly hilarious production which spirals through the gaudy filth of 19th century London. As Sondheim’s distinctive music blends beautiful melody and harsh discordance, the electrifying action drives its disturbing tale from the veiled brutality of upper-class houses through the violent underbelly of the city’s working-class streets and docks, and ultimately, to its inexorably tragic conclusion in Mrs. Lovett’s bakehouse. As Sweeney himself says, “There’s a hole in the world that’s a great black pit, the vermin of the world inhabit it, and it goes by the name of London.”

Austin Opera, voted “Opera Company of the Year” for 2020 in a national BroadwayWorld.com poll, engages 35,000 community members annually through three mainstage productions, an innovative Opera ATX experience, an online digital series, as well as a diverse slate of community and educational programming.