PENFOLD IN THE PARK 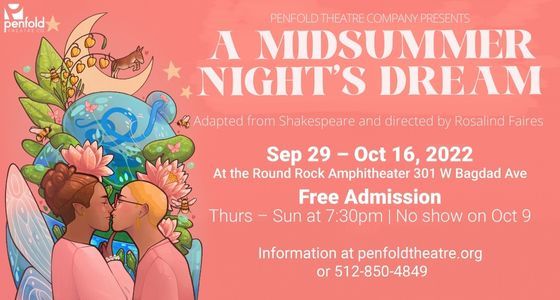 Part of the 15th season of Penfold, Penfold in the Park returns with a joyful reimagining of Shakespeare’s A Midsummer Night’s Dream placing all 21 characters in the hands of 4 virtuosic performers for a free night of fun for the whole family!

In this most beloved of Shakespeare’s comedies, Lysandra loves Hermia, Hermia loves Lysandra, Demetrius loves Hermia, Helenus loves Demetrius, and no one loves Helenus (poor Helenus). When the members of this tangled love quadrangle lose themselves in a magical forest one midsummer evening, a band of mischievous fairies playing loose with a certain love potion catapult the romance, confusion and fun to an enchanted new level! Add a pair of warring fairy courts, a donkey head and a troupe of enthusiastically inept actors - then place all 21 roles in the capable hands of 4 virtuosic performers - and you’ll be howling along with the characters, “Lord, what fools these mortals be!”

Penfold in the Park is free outdoor theatre provided in partnership with the City of Round Rock. A Midsummer Night’s Dream allows Penfold to re-start the Penfold in the Park tradition with a fun, playful production in keeping with Penfold’s new aim to reimagine classic works. The play will be the 10th installment of Penfold in the Park and the first at a new time - fall, rather than summer - for a more pleasant audience experience.

Adapted and directed by Rosalind Faires

Penfold Theatre Company has served the north Austin metro area for 15 years by telling intimate stories of hope and empathy. The company has reemerged from the pandemic with a particular focus on reimagining classics, which is reflected in the season line-up, as well as in several new initiatives.

In addition to the professional plays and musicals Penfold is known for (Penfold in the Park and the annual holiday radiocasts) new company initiatives include a five-year New Play Commission Series, a new Great Plays in Great Places Series and an Arts Leadership Apprenticeship in partnership with Texas State University.

The aim is that these new programs will have increased impact on the City, Sector and Penfold: City, by investing in Central Texas artists and creating community and dialogue around their work; Sector, by consciously reimagining the classical repertoire for a modern, diverse, local audience; and Penfold, by telling transportive stories that rekindle a sense of shared humanity, empathy and hope.