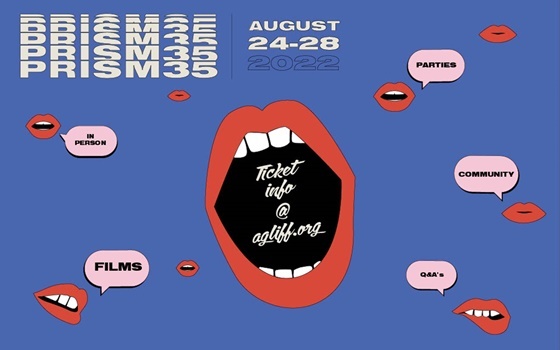 Austin’s oldest film festival and premiere LGBTQ+ film festival of the Southwest, aGLIFF will present PRISM 35 August 24-28, 2022. The annual event will celebrate in person at the Galaxy Theatres with screenings, events, Q&As and more. Most of the PRISM 35 films will become availalbe online from August 29-September 5, 2022 (additional fees may apply).

aGLIFF’s celebration of the 35th annual festival will salute both the rich history, but also recognize how the LGBTQ+ experience has changed.

aGLIFF Memberships offer priority access to PRISM 35. Members will get full access to both the in-person and , priority seating to in person events, and additional perks. Memberships can be purchased any time by clicking here.

Founded in 1987 aGLIFF is Austin’s oldest film festival and became a 501(c)3 in 1995. The festival began as a four-day event with just four films primarily focused on coming out and the AIDS epidemic. It has grown into a multifaceted nonprofit organization with year-round community programs and events culminating each year in the annual film festival. Originally named the Austin Gay & Lesbian International Film Festival (1987) the organization changed its name in 2018 to All Genders, Lifestyles, and Identities Film Festival to reflect the changing landscape of how queer people identify, and as of 2020 now goes by simply aGLIFF. In 2019, the Board of Directors selected PRISM as the festival theme to highlight the way the festival can refract a single beam of art into multiple viewpoints, showcasing all the voices in the spectrum of our LGBTQIA+ community through film.

The organization’s mission is to create positive and visible film programs relevant to the lives of LGBTQIA+ identified people, to educate the community about LGBTQIA+ issues, to produce and promote the best in LGBTQIA+ community building events, and to support and partner with other organizations to enlighten the public.