ISHIDA Dance Company: No Speaking Left In Me

NO SPEAKING LEFT IN ME 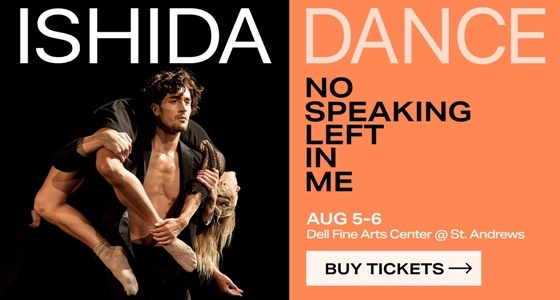 ISHIDA Dance Company presents an evening of world premieres in contemporary dance that invite existential questions: no speaking left in me features works choreographed by ISHIDA, John Wannehag from Staatstheater Mainz and Stephanie Troyak from Tanztheater Wuppertal Pina Bausch and the Texas premiere of DOMA by Jeremy Galdeano and Vera Kvarcakova who have created works on Les Grands Ballets Canadiens and Nationaltheater Mannheim Tanz.

ISHIDA blends contemporary dance with theatrical elements while retaining the physicality and beauty of the human form from traditional ballet. ISHIDA presents unique narratives relevant to a modern audience that explore archetypal themes connecting to audiences’ psyche and emotions. Two world premieres by ISHIDA include “when shall we three meet again” exploring a complicated relationship between three sisters and “i want to hold, darling” which derives from the historical context when families in Spain thousands of years ago buried the dead within their homes and ancestors tenderly watched over them to guide and comfort. The program will also include a poignant duet originally performed in Wuppertal by John Wannehag and Stephanie Troyak, and the Texas premiere of DOMA by Jeremy Galdeano, a French national and former First Soloist with Les Grands Ballets Canadiens and Vera Kvarcakova, Soloist with the National Theater Mannhein Tanz originally from the Czech Republic. DOMA was a part of Les Grands Ballets mixed bill Parlami d-Amore in May 2019, was presented at Carte Blanche DAC 2019 in Montreal, and selected for the Noverre-Young choreographers evening at Stuttgart Ballet. Their work was performed at the Joyce Theater in October. This is only the second time their work has been presented in the US.

Ishida Dance Company presents world-class contemporary dance performances consisting of new works by up-and-coming choreographers that are innovative and unique experimenting with dance and contemporary narratives in dance theatre to support accessibility for audiences to gather meaning in performances. Such programming extends an invitation towards introspection and embracing Otherness.