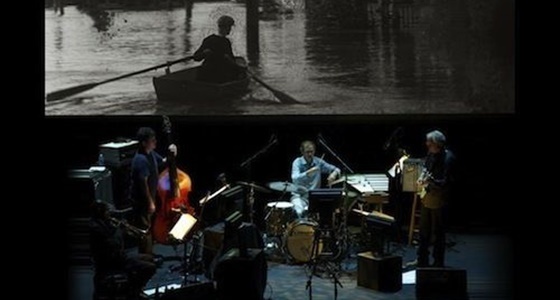 The Great Flood is a collaboration between filmmaker and multimedia artist Bill Morrison and guitarist and composer Bill Frisell inspired by the 1927 catastrophe.  The performances are co-presented with UT’s Visual Art Center as part of their exhibition Bill Morrison: Cycles & Loops.

Many consider the flooding of the Mississippi Delta in 1927, which left 27,000 square miles of land underwater, to be the greatest natural disaster in the history of the United States.  Part of its legacy was the forced exodus of displaced sharecroppers who left plantation life and migrated to Northern cities, adapting to an industrial society with its own set of challenges.  Musically, the Great Migration fueled the evolution of acoustic blues to electric blues bands that thrived in cities like Memphis, Detroit, and Chicago, becoming the wellspring for R&B and rock as well as developing jazz styles.

These events are reflected in Morrison’s film The Great Flood, a cinematic elegy based on archival photographs and newsreels and focused on ordinary people and their ability to adapt under extraordinary circumstances.  Frisell’s score is informed by elements of American roots music, mixing rock and country, jazz and blues.  Morrison’s projected film is accompanied by live performance of Frisell on guitar, Tony Scherr on bass and Kenny Wollesen on drums.  Together, historic imagery dances with the sound of modern music.

Texas Performing Arts is the performing arts presenting program of The University of Texas at Austin and operates campus venues including Bass Concert Hall and McCullough Theatre. It is the home of the Broadway in Austin series, a curated program of performing arts, and a host of comedy and concert events. In calendar year 2019 Bass Concert Hall had the highest number of tickets sold of any theater in Austin, was #2 in the State of Texas, and #22 in the world, according to industry publication Pollstar. Following a national search, Tony Award-winning producer Bob Bursey was appointed Executive and Artistic Director in January of 2020.