Kronos Quartet
At War With Ourselves – World Premiere 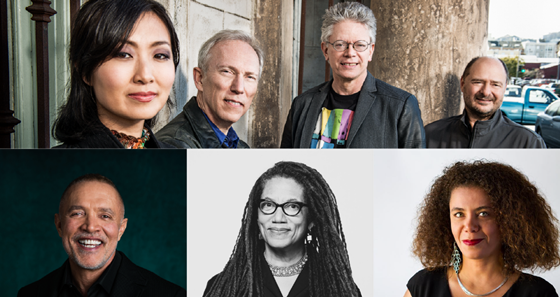 For over 45 years, San Francisco’s Kronos Quartet – David Harrington (violin), John Sherba (violin), Hank Dutt (viola), and Sunny Yang (cello) – has pursued a singular artistic vision, combining a spirit of fearless exploration with a commitment to continually reimagine the string quartet experience.  In the process, Kronos has become one of the most celebrated and influential groups of its generation, performing thousands of concerts worldwide, releasing more than 60 recordings of extraordinary breadth and creativity, collaborating with many of the world’s most accomplished composers and performers, and commissioning more than 1,000 works and arrangements for string quartet.

At War With Ourselves is an evening-length work for string quartet, chorus, and spoken word. The music is composed by Michael Abels, who is best-known for his scores for the Oscar-winning film Get Out and for Jordan Peele’s Us, for which Abels won multiple critics’ awards and nominations.  The hip-hop influenced score was short-listed for the Oscar, and named “Score of the Decade” by online publication The Wrap.

The libretto is written by National Book Award-winning poet Nikki Finney, inspired by her 2013 poem “The Battle of and for the Black Face Boy.” Finney’s evocative poetry, which directly inspired Abels’ music, was written in 2019, the 400th anniversary of the African presence in America.  The intimate, emotionally-charged text — in turns both bold and seductive, and always deeply personal — flits throughout history with allusions to slave ships, Harriet Tubman, black astronomer Benjamin Banneker, and Olympians Tommie Smith and John Carlos.  In Finney’s words, the work is addressed to “both black and white, both enslaved and free, bystander and non-bystander.  We were then and now, At War With Ourselves.  All of us, one human battlefield.”

The work will be performed by a chorus of Austin-based singers, including recent alumni/ae and current students of the Butler School of Music.  The chorus will be conducted by San Francisco-based choral director Valérie Sainte-Agathe, Artistic Director of the San Francisco Girls Chorus.