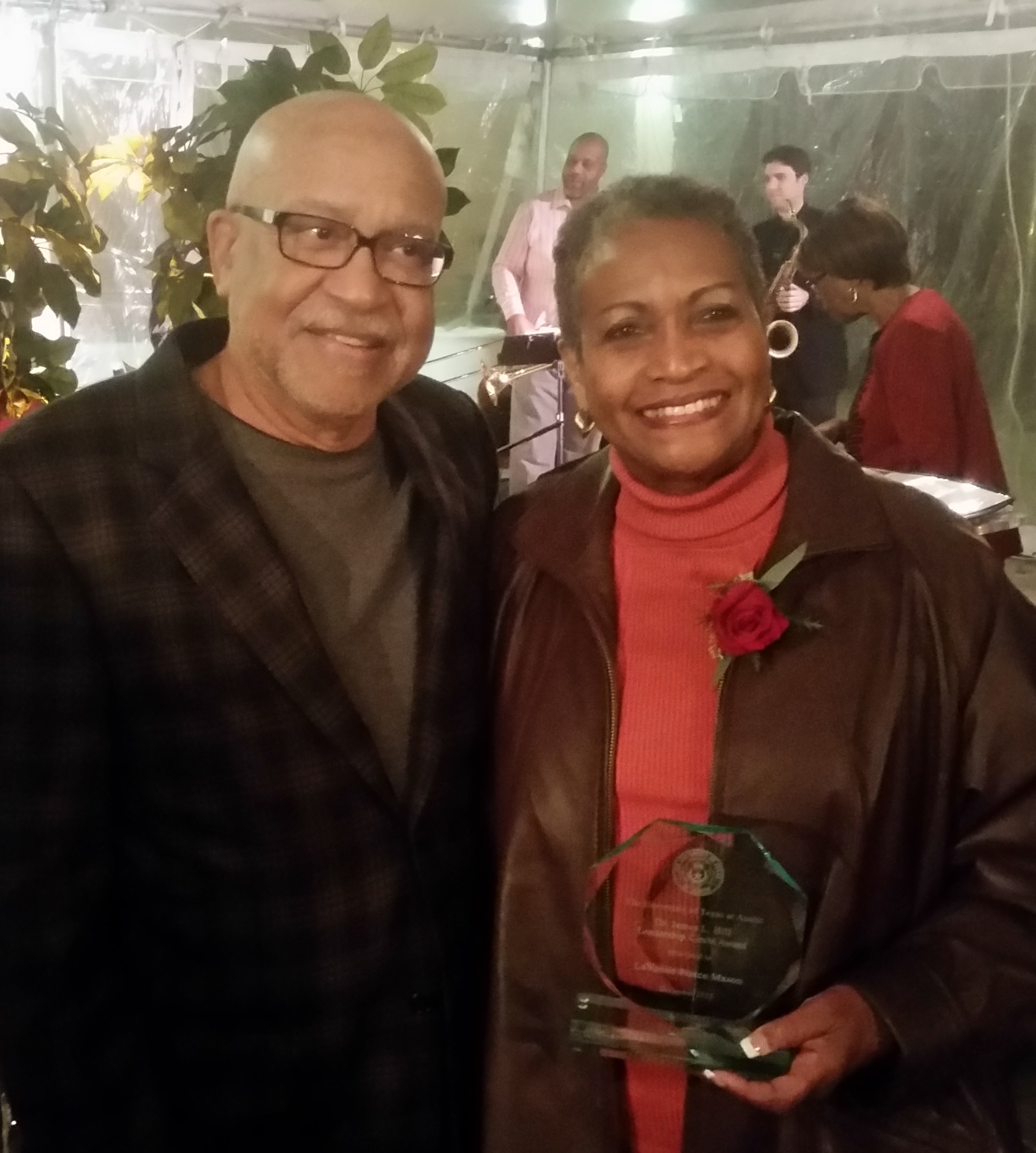 Norman and LaVonne Mason at the 2015 Community Leadership Awards

A new member of the KMFA Board of Directors, LaVonne P. Mason is a native of Washington, D.C. and a 1969 graduate of Howard University College of Liberal Arts where she met her husband, Norman L. Mason, a native of Marshall, Texas. She earned a Bachelor of Science degree in Home Economics with a minor in Education and Norman was a 1966 graduate of the Howard University College of Liberal Arts and a 1970 graduate of the Howard University College of Dentistry. Upon Dr. Mason’s graduating, they married and moved to Austin, Texas where he practiced general dentistry for 49 years and was the managing partner in the practice of Drs. White, Mason & McElveen, LLP, one of the largest ethnically diverse practices in central Texas. LaVonne has served as a Regent of Texas Woman’s University, helped found the Austin Area Urban League, and created the Etiquette Authority. Norman and LaVonne have two sons, Michael and Mark (the father of the late Draylen Mason). LaVonne was awarded the Dr. James L. Hill Leadership Circle Award in December 2015 by the University of Texas at Austin in recognition of her service to the Austin community.

How long have you been KMFA members and how did you start listening?

LaVonne: I had the pleasure of being recruited to the KMFA board in 2020 by Ann Hume Wilson, President & General Manager of KMFA, with the support of the Nominating Committee and a unanimous vote by the Board of Directors. I attended my first KMFA Board meeting via Zoom on September 23, 2020. Norman and I started listening to KMFA through the musical influence of our only grandchild, the late beloved Draylen Mason. He was a gifted 17-year-old bassist and a senior at East Austin College Prep and was excited about receiving acceptance letters from six top colleges/universities. The “Austin bomber” delivered a bomb package during Spring break for Draylen’s school and placed it overnight at his front door. He became the second victim on March 12, 2018.

Draylen was an accomplished musician who played with classical orchestras as well as mariachi and jazz bands. He was a Bassist at Interlochen Center for the Arts, Principal Double Bass at Austin Youth Orchestra Advanced Symphony, Principal Bassist at Austin Soundwaves, and his church, Corinth Missionary Baptist Church. During the last 10 years of his life, he had a standing monthly “Date-Time Weekend” appointment with us, whom he affectionately referred to as Nana and Pappi, and he would listen to classical music throughout the entire weekend. His last weekend of his life was spent with us.

With the loss of Draylen, it is painful for Norman to listen to classical music or attend concerts because it reminds him of Draylen. Therefore, I listen to KMFA 89.5 while driving in my car.

What is your favorite program to listen to on KMFA?

LaVonne: While driving in my car, I listen to Midday Oasis with Dianne Donavan and Rideshare with Sara Schneider. It is interesting to learn about the history of music’s evolution, life stories of composers, and the different instruments and how they sound. Listening to classical music has a calming and comforting effect on me.

What is one of your all-time favorite pieces of music and why?

LaVonne: One of my all-time favorite pieces of music is Leonard Bernstein’s “Somewhere” from West Side Story. The story revolves around the love affair between Tony, who is a Polish American and Maria, a Puerto Rican. Also, West Side Story involved two rival gangs, the Jets and the Sharks. Their performance was upbeat with lots of tension and high emotions addressing social issues that resonate today.

Leonard Bernstein brought classical music to the masses. This was his greatest achievement as a composer. He was considered a Renaissance man of music as he excelled with his ability to play complex orchestra scores on the piano. Bernstein was one of Draylen’s favorite composers. Draylen was referred to as being a Renaissance Man. He exhibited the ability with Austin Soundwaves to play more complex and challenging music and would often say to his music teachers, “let’s step it up.”

Why do you choose to support KMFA?

The Draylen Mason Music Studio is the centerpiece of the new KMFA headquarters located at 41 Navasota Street in Austin. The studio can accommodate 135-seats where audiences will be afforded the experience of live broadcasts, concerts, and community and educational programming.

We are happy and honored to be a part of the esteemed KMFA family.

While contributing to the development of raising their two sons, she chose not to work outside the home until they were in middle school. However, she actively participated in numerous community/civic/educational oriented organizations on the local, state, and national level.  Currently, she is a member of KMFA Board of Directors, The University of Texas at Austin College of Liberal Arts Foundation Advisory Council, Austin Soundwaves Advisory Council, Women’s Auxiliary to the Gulf State Dental Association, Charter & Life Member of the Austin Area Urban League and Austin Area Urban League Guild, National Urban League Quarter Century Club, Friends of the Governor’s Mansion Docent Committee, Texas Alliance of Black School Educators, and Retired State Employees Association. She and Dr. Mason are members of Wesley United Methodist Church.

In 1988, she was employed by the Texas Education Agency and during her tenure there she advanced through the system with a variety of responsible leadership positions. She monitored and provided technical assistance to local public-school districts and charter schools. After 23 years of service, she retired in 2011 as a Program Specialist.

In 2012, LaVonne graduated from the prestigious American School of Protocol in Atlanta, Georgia and earned dual certification in Children’s and Corporate Etiquette Training. She is a certified etiquette consultant who founded the Etiquette Authority, LLC in 2012 an etiquette, social skills, and business protocol company for first graders through college-age adults and beyond. During the past eight years, she has conducted seminars, special parties, events in life skills, social skills, dining skills, and business etiquette training for the 21st century.

She has received numerous awards and honors, but the most recent award was The University of Texas at Austin’s Dr. James L. Hill Leadership Circle Award on December 2015.  This award was in recognition of her community service to the Austin area and was presented by University President Dr. Gregory L. Fenves and Dr. Gregory Vincent.

Norman and LaVonne have two sons, Michael and Mark (who is the father of the late Draylen Mason).

Norman is a member of his local, state, and national professional societies. He received the Gulf States Dental Association “Dentist of the Year” award in 2001 and the Texas Dental Association “Life Membership” award in 2011.  He served a six-year term on the Texas Medical Advisory Board for Dentistry and, in March 2003, Gov. Rick Perry appointed Norman to a six-year term on the Texas State Board of Dental Examiners where he served as Chairman of the Rules and Regulations Committee. He also served as Dental Examiner for the two national dental licensing boards: Northeast Regional Examining Board and the Western Regional Examining Board where he served on the Executive Committee.

The close proximity of Dr. Mason’s office to the University of Texas enticed him early on to become an active participant in the University community. For four decades he, along with his wife, served as mentors to young African American student athletes. They have had the good fortune to see most of them excel in life, becoming solid citizens and pillars of their communities. Dr. Mason is a past president of the Austin Longhorn Club, a life member of the Longhorn Advisory Foundation, and a member of the Board of the Directors of the University of Texas Club.