SONGS UNDER THE STARS 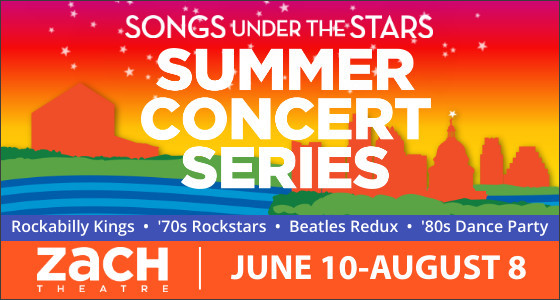 Employing the same health and safety guidelines as the Spring concerts, ZACH Theatre is ready to welcome patrons on campus throughout the summer. Although socially distanced pod seating looks different than a traditional show at ZACH, the “Songs Under the Stars” concert series brings the joy of live performance back to the People’s Plaza with esteemed performers and an outdoor bar all under the stars while surrounded by the Austin skyline.

Opening the series for the first two weeks, Paul Sanchez, Corbin Mayer, Luke Lindsteadt, and Zack Zaromatidis will celebrate the icons of rock-n-roll and country with “Rockabilly Kings.” ZACH’s dynamic performers and musicians will blaze the stage with jukebox classics like “All Shook Up”, “Ring of Fire”, “Pretty Woman”, “That’ll Be The Day”, “Blue Suede Shoes”, “Great Balls of Fire” and other favorites sure to have you dancing in your seat.

Back by popular demand, week three will bring the return of the Fall series hit, “70’s Female Rockstars” starring Leslie McDonel, Olivia Nice, and Laura Benedict. These powerhouse women will bring the iconic female voices of the 1970's alive on the Plaza showcasing the sounds of Joni Mitchell, Carole King, Janis Joplin, and others in an evening full of cool vibes on a summer night.

The next three weekends of “Songs Under the Stars” will bring soul, blues, and the timeless music of the legendary Beatles reimagined to the Plaza with “Come Together: Beatles Redux” featuring Michael Valentine, Roderick Sanford, Jessica O’Brien, and Courtney Santana. Inspired by Beatles renditions from the greatest soul and rhythm and blues artists of the 60’s and 70’s, like Aretha Franklin, Joe Cocker, Earth Wind & Fire, Tina Turner, and others, this evening will include soulfully orchestrated arrangements from one of the most influential bands of all time including “Yesterday”, “Hey Jude”, “With a Little Help from My Friends”, “Got To Get You Into My Life”, “Let it Be” and more.

Weeks seven and eight will close out the “Song Under the Stars” Summer series with “80s Dance Party “, a totally tubular love shack dance party of schrunchies, shoulder pads, and parachute pants all in a totally rad concert. Featuring the biggest hits of the 80s such as the B52’s, Talking Heads, Go-Gos, Blondie, Madonna, Whitney and so many others, Kenny Williams and Leslie McDonel will cut footloose and bodacious tunes all night long. 80s fashion is encouraged, so dress up and party down, time to get out the leg warmers and hair spray for the time of your life.

Run Time for Series: All performances will run approximately two hours with an opening act and a 15-minute intermission.

Opening Acts will be announced at a later date.

Full information on the 2021 Summer Concert Series can be found HERE.

ZACH will continue to communicate clearly and directly about their plans and activities so they can continue to offer world class theater in the safest possible environment.

A non-profit organization, ZACH creates intimate theatre experiences that ignite the imagination, inspire the spirit, and engage the community. As Austin’s leading professional producing theatre, ZACH employs more than 300 actors, musicians, and designers annually to create its own diverse array of nationally recognized plays and musicals under the leadership of Producing Artistic Director Dave Steakley and Managing Director Elisbeth Challener. Each year, ZACH serves nearly 140,000 Central Texans – 57,000 of which are children and youth who participate in our education and outreach programs, as well as inspiring camps and classes.  ZACH Theatre is honored to host private and community events across the beautiful rental-ready spaces on our three-stage campus located in the heart of Austin. Founded in 1932, ZACH is the longest continuously running theatre company in the state of Texas, and one of the ten oldest in the country.