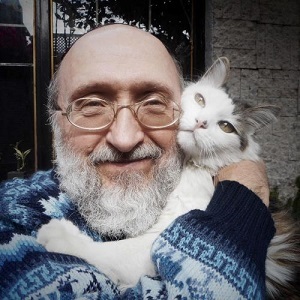 I was born in Bayonne, Pyrénées-Atlantiques, France, on September 2, 1957. My family moved to Mexico City when I was 9 years old, due to the assignment of a diplomatic post from my father. I studied Physics at the National Autonomous University of Mexico (UNAM). Within two weeks of earning my diploma, I headed to the University of Texas at Austin in 1980. I spent two wonderful years in the state capital, not only reaching the goal of a Master degree in physics, but also discovering the beautiful people living there, no doubt a peculiar city, traveling many miles on my bicycle and playing my clarinet with some graduate students of the Physics Math & Astronomy Building: we had unforgettable moments (we even played on a Friday night at the Cactus Café at the Texas Union in Campus).

Right there I met Professor Ilya Prigogine (winner of the 1977 Nobel Prize in Chemistry); He was interested in my research and offered me to go to work with him my PhD in physics in Brussels, Belgium, which of course I accepted. Thus, I concluded my doctorate in physics at the Free University of Brussels, having undertaken philosophy studies at the Catholic University of Louvain a year before the end of the PhD and concluding them four years later. I spent 14 years in Belgium, one in Paris and two in Salamanca, Spain, as a professor and researcher on complexity science issues.

It was time to return to Mexico where my father was alone and ill. It was then when I decided to study medicine and thus be able to better accompany my father in his needs. I studied medicine at UNAM and, when I finished, I continued with studies in neurology.

Today I am part of the Faculty of the UNAM School of Medicine, coordinating clinical research and directing the SACO (open systems and complexity, for its acronym in Spanish), which is a group of students and teachers who study and do research in the issues of complexity in medicine. I am very happy combining the studies that I have done in my life, in a coherent and innovative way.

Having passed away mom, dad and my brother, I live alone, well not totally alone since I am accompanied by my very beloved cat (Gardel) and, obviously, by my Buffet Crampon (Tradition) B-flat clarinet. I write articles and books, I give courses and conferences: during the confinement by SARS-CoV-2 I have written stories (one talks about clarinets, of course) and I have been able to work on techniques that I had never explored before with my instrument in the area of ​​klezmer, very difficult and a great challenge.

My closest relative is in Tenerife and every time I can, I make the leap to the Canary Islands, Paris or Brussels. For me, art, science and philosophy are the highest manifestations of the human spirit.

How long have you been a KMFA member and how did you start listening?

I was a member of KMFA for 6 to 8 months in 1981, just before leaving for Brussels, when I was living in Austin. A friend from graduate school in physics saw that I was desperate because I could only listen to my "Walkman" (which used cassettes) and my budget prevented me from buying music. This friend of mine told me about KMFA… I must confess that I was very surprised that classical music was heard in Texas and I immediately fell in love with the public project of the radio station, because I felt that it was a fair, beautiful and free plan, values that we French tend to share. My little income was used to go and listen to the magnificent Austin orchestra: I was able to listen to Jean-Pierre Rampal, Eduardo Mata, Norma Procter, Maurizio Pollini, etc. Not bad, huh?

A year and a half ago, making great efforts to remember the name of the station, “Miss Amnesia” came to my aid and I remembered "KMFA"; with great pleasure I discovered that there was the possibility of listening via the internet. I became a member once again and there is not a day that I am not grateful for being able to reconnect with my old family in Austin.

What is/are your favorite program/s to listen to on KMFA?

That is a tough question because there is so much to enjoy at KMFA. Thus, it is conditioned by my work schedules, courses and consultation in the hospital that I choose. I have to say, though, that I really enjoy listening to Jeffrey Blair on Workbench, always picking out interesting topics; the great Emilio Alvarez, in Breakfast Blend (there I learned that his cat’s name is Dalí!); Midday Oasis and Classical Austin with Dianne Donnovan usually remind me of a lot of my personal musical min quests; the magnificent Sunday program, Early Music Now, tends to launch me into my medieval Brussels musical learning; I regret not always being able to follow Guillermo Delgado, but what little I get to hear is great and always very pleasant. I listen to Carla McElhaney from time to time when reading at night, it is usually great and haunting music. Ryan Kelly is extremely cordial in crescendo, I wish I could hear him more often. And finally, I learn from everyone because they are great teachers and they make one feel always welcome, like in a wonderful family.

What is one of your all-time favorite pieces of music and why?

An even more difficult question because I happen to adore Mozart and Bach, as the most absolute geniuses. Nonetheless, I cherish Couperin, Rameau, Haydn, Schubert, Mendelssohn, Berlioz, Brahms, Strauss (Richard), Bruckner, Liszt, Ravel, Saint-Saëns, Debussy, … However, if I had to mention a work that particularly captivates me and I have to stop doing whatever I am doing, I mean whatever, to listen to it without interruptions, that would be Gustav Mahler's Symphony No. 3 in D minor, specially the third movement (Comodo. Scherzando. Ohne Hast) in the very different versions by Leonard Bernstein, Pierre Boulez and Rafael Kubelik, all three extraordinary.

Why do you choose to support KMFA?

I choose to support KMFA simply because I love the idea of a public station that spreads beauty, that always intelligently comments on masterworks and their composers, that never fails to consider the human being in music, that respects the integrality of works and that infects the passion and interest in musical expressions that are not entirely conventional. Also, and this is stronger than me, I have special affection for Austin and supporting KMFA puts me back in that city that meant a turning point in my life. Happily, at this moment, it is possible for me to contribute part of my salary to such a noble project.

Finally, I am convinced that the music that KMFA transmits, which is the one that I love with all my being, effectively contributes to making our difficult and complicated world a place that, hiding all the universal beauty in each atom, projects its temporality and thirst for infinity and absoluteness through music produced by privileged heads. I wouldn't miss a show like this for nothing.