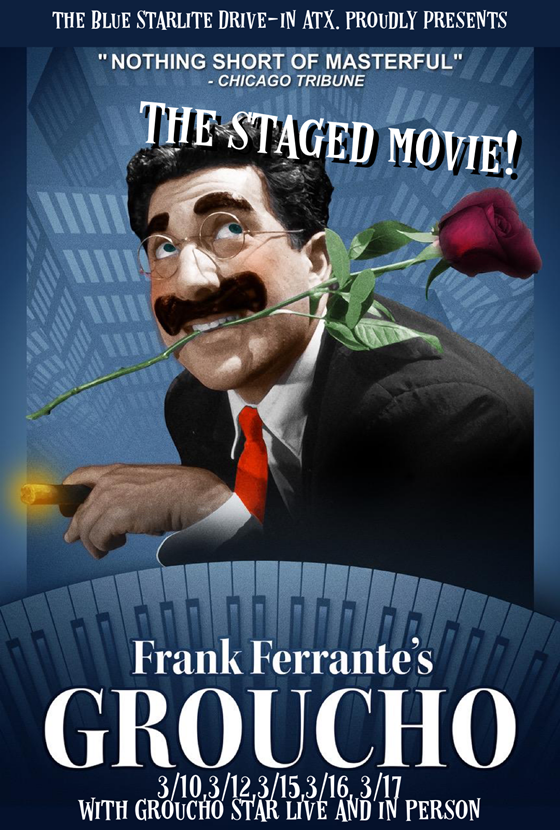 Ferrante, who wrote the stage vehicle, portrays legendary comedian Groucho Marx in the internationally acclaimed show that has racked up over 3,000 performances in over 500 cities since 1985. Independent filmmaker Dreya Weber (The Gymnast and A Marine's Story) directs the stage and film version. Screenings are scheduled through April 7th at the Blue Starlite Drive-In Downtown and Austin Mueller locations.

Blue Starlite's owner Josh Frank says the collaboration with Ferrante emerged from the challenges presented to live theaters and stage performers by the pandemic. A New York Theatre World Award winner and a London Laurence Oliver Award nominee for the role, Ferrante will introduce the first week of screenings with question and answer sessions immediately following.

The Marx Brothers classic film Monkey Business which celebrates its 90th anniversary will be offered on a double bill with select screenings.

The owners claim to have jump started the new drive-in resurgence that is currently sweeping the nation!​ The outdoor screens take 15-40 cars a night depending on the location and screen so customers get all the attention they deserve. The most intimate, personal, one of a kind drive-in experience in the world!

Blue Starlite the drive- in movie theater for the modern age with locations in downtown Austin, Mueller, and Round Rock.