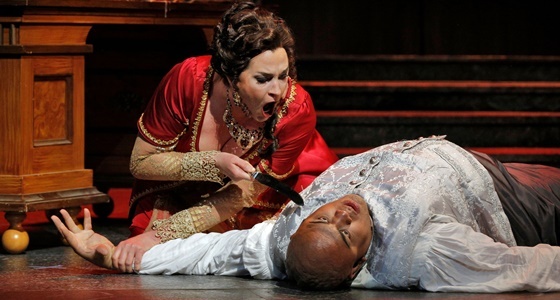 Austin Opera will present Puccini’s towering masterpiece Tosca April 24 to May 2 at the Long Center. Set in a trio of breathtaking Roman locales, Tosca follows a strong-willed diva as she makes the ultimate leap of faith in pursuit of love.

Celebrated American soprano Latonia Moore joins the cast in the title role, replacing Leah Crocetto, who has withdrawn from the production for an extended engagement in Australia.

A native of Houston, Moore makes her Austin Opera debut as the fiery diva caught in the crossfire of love. She has recently sung Tosca at Washington National Opera, Opera Australia, and in Rouen, France. Last season, she was highly praised for her role as Serena in a new production of the Gershwins’ Porgy and Bess at the Metropolitan Opera, where she stopped the show at each performance singing “My Man’s Gone Now.”

Tosca, which also stars Adam Smith as Cavaradossi and Aleksey Bogdanov as Scarpia, is conducted by the Sarah and Ernest Butler Principal Conductor & Artistic Advisor Timothy Myers and directed by David Lefkowich.

Director David Lefkowich will faithfully recreate three postcard visions of Rome on the Long Center stage – the church of Sant’Andrea della Valle, an apartment in the imposing Palazzo Farnese, and the roof of the Castel Sant’Angelo. Sarah and Ernest Butler Principal Conductor and Artistic Advisor Timothy Myers, a protégé of famed conductor Lorin Maazel and fresh off the podiums of the Wexford Festival and Santa Fe Opera, returns to lead the Austin Opera Orchestra and Chorus in one of opera’s most memorable scores, including the breathtaking Act I finale, “Te Deum.”

Additional tickets will be released soon!

Originally founded in May 1986 as Austin Lyric Opera, the city’s first professional opera company, Austin Opera has become a cultural touchstone for the fine arts community in the Central Texas region and has gained national acclaim as a producer of great opera. Co-founders Joseph McClain and the late Dr. Walter Ducloux envisioned a dynamic company that would enrich, entertain, and educate the community. In January 1987, the sold-out inaugural production of Mozart’s “The Magic Flute” debuted to rave reviews. “One could not hope for a more polished first showing,” praised an Austin critic.

Austin Opera is committed to producing and promoting outstanding opera that will entertain, enrich and educate the central Texas community.  Austin Opera is a cultural destination for the community that delivers an extraordinary experience; a creative environment that challenges the misconceptions of the art form; enables lifelong learning, and celebrates the diversity that makes Austin unique.