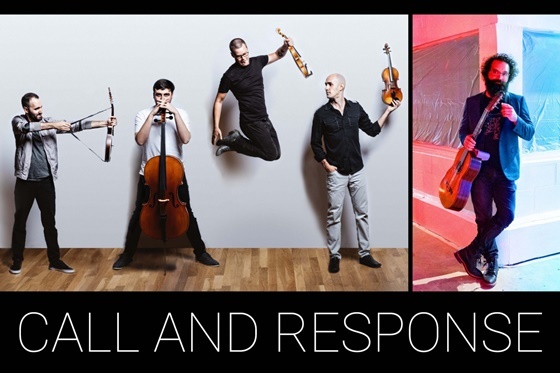 Support for this program provided by:

CALL AND RESPONSE enjoys a special dual citizenship. It falls under the umbrella of KMFA’s intergenerational Star Notes Project, which offers opportunities for deep connection through explorations of music and meaning across generations. The concert was also presented as an installment of Austin Classical Guitar’s Austin Now series, where outstanding artists from Austin collaborate through different mediums to create a statement of our time. KMFA’s Carla McElhaney and Austin Classical Guitar’s Joe Williams served as co-artistic directors, engaging Thomas Echols and the multi-instrumental quartet Invoke to compose, arrange, and perform the music for this groundbreaking, community-driven event.

The concert was inspired by five lively conversations which took place over Zoom between three youth and elder pairs from Austin Soundwaves and the Rebekah Baines Johnson Center. Each discussion was moderated by Invoke violinist Zachariah Matteson. Participants were asked to describe their first memories of music, talk about songs that made them feel safe, and to dream up playlists that they might offer as gifts to loved ones. Over two dozen different works and artists were mentioned across a broad range of genres and styles, from Kind of Blue by Miles Davis to Debussy’s Clair de Lune. The music and ideas generated by these discussions influenced the lush, poetic, and evocative sonic landscapes created by Echols and Invoke.

Echols also provided participants––and the wider community––a unique opportunity for creative play through the invention of a proprietary CALL AND RESPONSE app. The app allowed users to isolate particularly precious moments of meaningful songs, and rework them to capture their essence and personal significance. Invoke and Echols used the app to reimagine music suggested by the participants and to compose new works. The program was then organized as a series of “calls” created by each member of the ensemble, designed to artfully convey the memories and ideas of the participants and performers, summon the musical memories of listeners, expand our collective imagination, and to connect us all through the joy of shared experience.

Special thanks to Azaria Hernandez, Paola Domíguez, and Diego Perez from Austin Soundwaves, and Rebekah Baines Johnson Center residents Janet Roberts, Farah Rivera, and Doug McWhorter for their enthusiastic participation in the conversations that inspired this concert. We would also like to thank the Cultural Arts Division of the City of Austin Economic Development Department, the Texas Commission on the Arts, and the St. David’s Foundation for their support of the Star Notes Project.

*freely adapted from the original

Click on the video below to view this amazing performance!