THE SUBJECT TONIGHT IS LOVE: A VIDEO PREMIERE 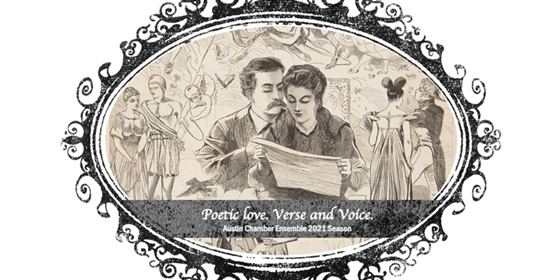 Austin Chamber Ensemble presents its 40th Season with works for soprano and piano showcasing the premiere of Ethan Wickman’s If You Have Not Been Drinking Love with text by Daniel Ladinsky, inspired by the 14th-century Persian Sufi poet Hafez of Shiraz. The program will include a brief video segment of the composer, Ethan Wickman, discussing this amazing work. The concert video will also include the song cycle Days and Nights by Lori Laitman, and a set of four-hand piano works. In addition to the poetry inspired by Hafez, the works include texts by Robert Browning, Emily Dickinson, and Christina Rossetti.

Admission is available on a sliding scale from $10-$50. Those who pay more allow others who are struggling to access the video for less.

The video will premiere on Sunday, May 9 and remain available for viewing through Friday, May 14.

Enjoy the video below of the composer, Ethan Wickman, discussing his commissioned work.

The Austin Chamber Ensemble was formed in 1981 as a wind quintet. It began with a series of six concerts in 1985 as a tribute to the Texas Sesquicentennial with the Six Flags Over Texas concerts featuring composers from France, Spain, Texas, Mexico, the Confederacy, and the US. These were performed in the Elizabeth Ney Museum and included Austin Chamber Ensemble members and guest artists.

Although the Austin Chamber Ensemble initially had a wind quintet as its core ensemble, it has gradually branched out to include all instrumental and vocal combinations in its concerts. Some of the more successful concerts have included chamber orchestra with two pianos and narrator in The Carnival of the Animals, Christmas concert with the Southwestern University Chorale, composers series including concerts featuring women composers and concerts of works by well-known composers Robert Starer and Emma Lou Diemer, who was in residence for the concert., and cabaret concerts featuring lighter works such as the Bolling Suite for jazz flute. Works have been commissioned from composers Donald Grantham, Noel Alford, and Emma Lou Diemer. A unique program was given November 7, 1997, Chamber Music Goes to the Movies, in which chamber music by film composers was featured. This was the first concert of its kind in Austin.

In addition to the Austin series, the ensemble has given concerts, master classes and school concerts in many Texas cities as part of the Texas Commission on the Arts touring program. In December of 1993 the ACE Wind Quintet was honored to be selected out of 300 groups to perform for the New Year's Fest in Kalamazoo, Michigan, and in June of 1994 for the Birmingham, Alabama City Stages Festival.

The Austin Chamber Ensemble has traveled three times to Europe to perform concerts in Germany, Austria, France, Belgium, and The Netherlands as part of its exchange program, and has also sponsored artists from Germany and France as well as other American states in Austin concerts.

Some special-event concerts of The Austin Chamber Ensemble have included a five-course dinner with wines at the Belgian Restaurant with chamber music interspersed between the courses. The owner, Jean Louis Dehoux, donated the entire proceeds of the event toward the Armonico Chamber Music Series.

Incorporated as a non-profit organization in 1985, the Austin Chamber Ensemble has always had as major goals creative programming, performing new works, artist exchanges and educational presentations.