TALES FROM THE DECAMERON 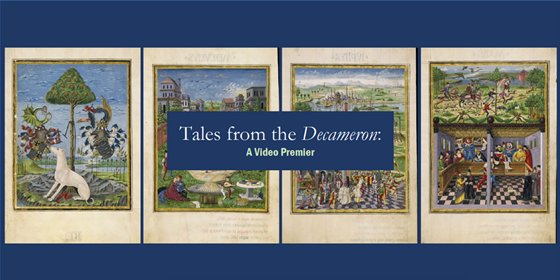 Boccaccio’s collection of stories from the mid-14th century tells a story of young Florentines who have fled from the Black Plague. In Tales from the Decameron, Texas Early Music Project (TEMP) will re-enact several of the stories that were told to entertain these refugees, with music from the 14th century, costumes, and a script by Guggenheim Fellowship winner, Dr. Larry Rosenwald.

The general admission price is the Fan category, $15.

If you're struggling due to the Coronavirus situation, take advantage of TEMP's lower-priced Student/Supporter offer. If you’re able to pay a little more, and can help someone else pay less, please do so with the Friend and Patron prices.

Patrons who purchase tickets prior to May 6 will be sent an email with access instructions. Please check your email (spam folder if necessary).

During the period 1995–2002, TEMP's Baroque orchestra (with Daniel Johnson conducting) performed in several productions with the Sarah and Ernest Butler Opera Center, including Purcell’s Dido and Aeneas, Baroque and Loving It, (a pastiche of selections from the works of Lully, Rameau, Cavalli, Cesti, and others, created by Daniel Johnson), Cavalli’s L’Ormindo, Monteverdi's Coronation of Poppea, and Handel’s Alcina and Rinaldo. TEMP performed regularly at the Early Music Weekend at Round Top Festival Institute, for the Texas Early Music Festival in Palestine, TX, for the annual Mostly Music Marathon benefiting AIDS Services of Austin, and in public and private concerts in the Austin area.

In 1998, TEMP became a member of the Austin Circle of Theaters, recorded its popular CD The Bonny Broom and Other Scottish Ballads,  and initiated its Midwinter Festival of Music, with two to three performances of a wide variety of concerts and operas on six successive weekends (1999–2002). Local performers and guests from Europe, Canada, and other parts of the US came together for performances of Handel’s Rinaldo and Alcina, Purcell’s King Arthur, a post-modern blending of early and modern music and theater (It's About Time), and an inclusive range of concerts ranging from Hildegard chants and Sephardic love songs to lieder by Schubert and Beethoven.

Since the 2002–2003 season, TEMP has offered a relatively calm six-concert season, between the months of September to May. Many of the concerts were so much fun and so popular that different versions of them were presented in successive years, including Convivencia: The Three Worlds of Spain (2004 and 2005) and The Play of Daniel (2003–2005).