Austin Shakespeare: The Importance of Being Earnest

THE IMPORTANCE OF BEING EARNEST 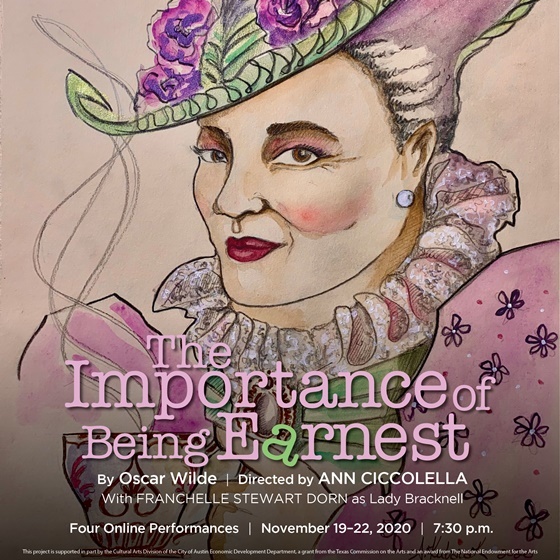 Austin Shakespeare will bring Oscar Wilde’s ever entertaining comedy The Importance of Being Earnest to online audiences for four evenings, November 19-22, 2020.

“Still today, we find that Oscar Wilde is the master of wit. From the first moments of the play to the last, his characters make me smile. Earnest is his masterpiece of comic situations,” said Artistic Director Ann Ciccolella. “And having Fran Dorn return to Austin Shakespeare as Lady Bracknell brings a whole level of joy to our experience.”

Set at the turn of the 20th century, The Importance of Being Earnest skewers Victorian social manners with hilarious satire about two friends, Jack and Algernon, who are both courting young women under false identities. The story ranges from Jack’s country estate to Algernon’s London townhome, with Algernon’s formidable aunt, Lady Bracknell, embodying the staid traditions of the British upper class and delivering some of the play’s most oft-quoted lines.

CAST
Austin Shakespeare has assembled an intriguing and diverse professional cast for the online  production, featuring local and national actors, including: Franchelle Stewart Dorn* as the indomitable Lady Bracknell and Tamil Periasamy as Algernon Moncrieff.

Costumes, designed by Aaron Kubacak, will be set at the turn of the Twentieth Century in frilly, frothy creams and fanciful hats. Lowell Bartholomee will return as Austin Shakespeare’s online video designer with elegant virtual backgrounds from the stripped wallpaper of Algernon’s townhouse to the flowered gardens of the house in the country.

Suggested pay-what-you-will online pricing is $10 for Adults, $5 for students and children under the age of 12.

“The Bard is only the beginning.”  Audiences travel many roads with this professional company for surprising and entertaining theater productions featuring heightened language these days on Zoom, Facebook, and YouTube and live at The Long Center’s Rollins Studio Theatre in the fall and spring, as well as Free Summer Shakespeare in Zilker Park and Young Shakespeare at the Curtain Theatre replica. Founded in 1984 and the only professional classical theater company in Central Texas, Austin Shakespeare stages performances that are fresh, bold, imaginative, thought-provoking and eminently accessible — connecting the truths of the past with the challenges and possibilities of today.

Austin Shakespeare is a proud member of the Austin Creative Alliance.