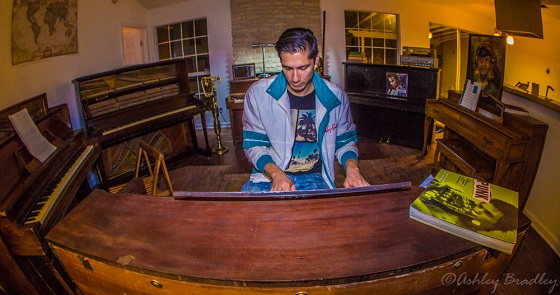 In this series, KMFA Story Seeker Natalie Zeldin explores Austin musicians and groups that are "on the edge" between classical and...something else. This is her seventh article in the series, for more, see her last article where Steven Snowden compares new music to beer.

Composer Nathan Felix got his start in the punk rock world. When the grand idea of writing a symphony eluded him, he bootstrapped his way into writing one. Now, he’s about to release the recording of his second symphonic work--Neon Heaven--this weekend. Nathan shares what attracted him to classical music and how he got started with writing it. He also talks about how classical radio has inspired him.

Your background is as a punk rock musician. Tell us a bit about your experience in that world.

I grew up on the border in Laredo, Texas. I wasn’t exposed to music growing up. It wasn’t until I moved to Austin when I was 15 that I saw my first concert. I thought “Wow, it’s an amplifier! I want to play the guitar!” I actually applied to study music in college but naively didn’t know you had to know how to read music to get in. So after I graduated from UT, I wanted to do music as much as I can [sic]. I got a gig booking bands, so I started booking my own band. We toured 30 days on, 30 days off--to work a job to make money for going on the road again.

Why did you start writing classical music?

After a while, I got bored playing punk rock. We were in Boston on tour and I heard the classical station. I fell in love with everything there. I wanted to do something with intricate layers and arrangements. I think it started off by thinking it would be cool to have an orchestra play my music. My brother took me to see John Corigliano’s Circus Maximus at Bass Concert Hall. The powerful beef that the orchestra was...I wanted my music to sound more like that.

So, how did you actually learn to write classical music?

The idea behind starting my band was to be in front of different orchestral instruments and learn hands-on. I knew absolutely nothing about any instrument other than the guitar. So when I got back to Austin, I put an ad on Craigslist looking for people who played orchestra instruments. We met in a warehouse, and 6 or 7 of those original people joined my band, The Noise Revival Orchestra. Eventually we had a 15-piece band, so I needed to learn to read and write music. The bandmembers gave me lessons, and over 4-5 years I learned.

Have you had any mentors to help you through this process?

The first one was I had was a guy who gave me the opportunity to record my first piece--Andre Lousada. He became a close friend. He would say I was wrong and we would fight it out. I learned that I’m always learning. I’ve also learned a lot from Brent Baldwin. He’s like an older brother. We often butt heads on ideas; he says it in a diplomatic way, but it gets under my skin. I listen to him because he’s experienced and has really helped me.

What’s the biggest similarity and biggest difference between the indie and classical music worlds?

Indie bands play because they feel something. You get a feel and you just groove with it. You just go with it. In the classical world, a lot is overthought and sometimes that feeling is lost. When I first got in the classical world, I was intimidated because of my lack of knowledge. Now I use it to my advantage-- we all make music.

Your second symphony--Neon Heaven--is being released this weekend. Tell me a bit about it.

It is a choral symphonic piece sung in Latin. I got into choral music when I was on an Asia tour with my band. I went to a monastery and saw these monks chanting. The voice is an amazing instrument. Then, I started listening more to Ancient Voices on KMFA. I fell in love with all of the Gregorian chant on the show.

Why did you write it in Latin?

Well, I started listening to a lot of choral pieces in Latin. The overtone of the voice is an instrument; you don’t need to understand it. It’s interesting and mysterious.

What is the text from?

I wrote it. The story is a questioning of what love is. It starts with a love letter, and it doesn’t end well. It’s about dealing with a feeling of purgatory--what is the meaning of existence without love? I wrote it in English, and graduate student in Austin helped me translate it into Latin. We sat a couple of sessions and she gave me different options of words to use.

This weekend you’re releasing the album of Neon Heaven. What is the event?

I’m doing a hodgepodge--it’ll be a listening party of the symphony, my birthday party, and also a performance of music three young composers from Keep Composers Weird, which is a residency I started.

How has living in Austin helped shape your musical identity?

The thing I love best about Austin is that there are so many people that are trying to push down their own barriers. It’s such a cool community which makes it easy to get inspired. You see what other people are doing and it’s easy to push harder and further. So it’s really cool that I can call up Graham Reynolds or that Justin Sherburn just played my piece on the weekend. There’s all this talent here, and it’s really cool for composers.

The release listening party for Neon Heaven will be this Saturday, May 14th at the Museum of Human Achievement. For more information click HERE.