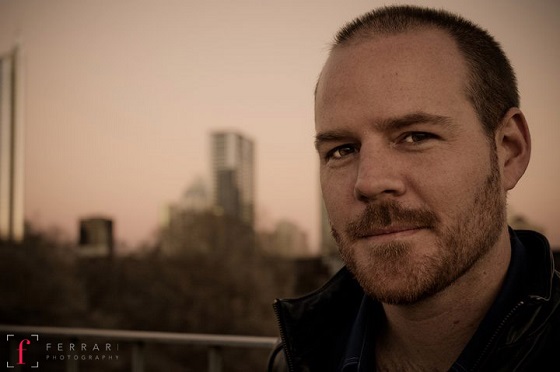 In this series, KMFA Story Seeker Natalie Zeldin explores Austin musicians and groups that are "on the edge" between classical and...something else. This is her sixth article in the series, for more, see her last article on Julie Fiore's new take on opera.

Steven Snowden  is a co-founder and director of Fast Forward Austin (FFA), a festival for new, experimental music that’s in its sixth year. Steven works as a composer, performer, and concert organizer. After he attended UT-Austin for his Doctorate of Music, he spent a couple of years abroad, in Portugal and Hong Kong. Now, he's moved back to Austin, his favorite city that he’s lived in (can we blame him!?) Here, we talked about why he loves music, his compositional approach, and the philosophy behind FFA.

How did you get started with music?

I started playing the french horn in high school. I picked up the horn because there were no other horns in the concert band--that way nobody could compare me to them. By senior year, I got pretty decent at it. I was finding that I was much more passionate about music. It was a big popularity move to go from a starter on the varsity football team to marching band!

Wow, leaving high school football for band! That’s a big deal. What was it about music that made you switch?

I grew up listening to a lot of classic rock, like Pink Floyd. I was originally into it for an image thing but then I realized that there was something special about music and how it makes you feel things. I'm a very curious person, so I wanted to know how it works: how music connects with people. The more I learned the more I became excited about it. And I wanted to look cool for all the girls.

How did you start composing?

When I was studying french horn during my undergrad, I started gravitating towards non-traditional extended techniques (for more about what extended techniques are, we covered it in this article). I wanted to do a presentation for my studio class on the strange techniques for the french horn, so I wrote a piece using them. It was a terrible piece, but I had a lot of fun doing it, so that's how it's been ever since.

Well, I was the first person in my family to go to college. The only reason I went was because I wanted to learn more about music. It took me a while because I was working at Walmart full time. At first, even though I knew the pieces I wrote weren't very good, it still felt right to be working on it.

Who is your musical role model?

What are you listening to now?

I really like Zap Mama. She’s a Belgian singer who’s originally from the Congo. I'd describe it as vocal driven Euro-Afro pop. I’ve also been listening to Värttinä, a Finnish group that started out as a 8-10 piece female vocal ensemble for folk music but is now doing more experimental pop. I’m just as open to art from the classical world as any number of things. There is always something to be gained from any type of music as long as it’s well done and genuine. Even if it’s a style I don’t particularly like, I always give it a chance.

I spend a lot of time thinking about the specific people that I'm writing for. I spend a lot of time laying on the floor imagining the ensemble playing what I just wrote and imagine being in the audience. Then I ask myself questions: “Is there enough energy?”, “Should there be something more surprising?”, “Should I fulfill the audience's expectations or subvert them?”

You just spent a year in Hong Kong, and the year before that in Portugal for different academic positions. What did you learn from being in two continents back to back?

One interesting thing about Portugal is that the faculty and students are very intelligent and hardworking but absolutely make time for socializing. Lunch was always a solid hour or two. People took a lot of time to enjoy life, which is a lesson that I definitely learned because many Americans have a tendency to work all the time. In Hong Kong, work is everything and grades are everything. If you don’t get good grades, you’re kind of stuck because grades determine income and how proud your family is going to be. The students were just so great to work with. At first, there was a big hurdle in such a creative field with no “right” answer. Once the students understood that, a lot of them took it and ran with it.

You recently moved back to Austin. How does Austin help you do what you do?

Austin is just right in terms of size and cultural offerings. It's big enough to support cultural institutions such as a the ballet and symphony, but not so big that I feel totally lost. I always find something that can be inspire me here. I can go to to see a modern dance concert and it will be really high quality. Of all the places that I've lived, I like living in Austin the most.

You're a co-founder and director of the Fast Forward Austin (FFA) Festival. How'd that get started?

Ian Dicke and I were in school together at UT. We were both interested in starting some kind of concert series. The third co-founder, Robert Honstein, had already moved to Yale, but the three of us met up and talked about it. Even though Austin has so many music festivals, there was sort of a gap for contemporary, experimental music. But because of the size and support of the arts in Austin, we felt there was room for something that could exist outside the academic institution.

What is the driving philosophy behind FFA?

We believe that if people hear high quality music, they will enjoy it. We want to create an environment for people who may not go to symphony or to UT can hear contemporary music. So we needed to create a relaxed environment where people can drink beer and wine and come and go as they please. We hold the program in community spaces or bars where people feel more comfortable. We’ve also wanted to wanted to cross-pollinate a range of ensembles. Half of the ensembles are from Texas, and the other half are from other places across the country. The series is a way to get these ensembles to be in the same space together.

What’s on the docket this year that you’re particularly excited about?

Tough one! Well, maybe Amid the Noise. It's a piece that's flexible for lots of players and lots of different instruments. We're going to have players from UT and Baylor percussion groups. It should be exciting to hear a new piece with lots of different people who don't normally play together. We'll also be in a new venue this year: 4th Tap, which is a brewery warehouse. Really, new music goes well with microbreweries. The kind of person who might try a sour wheat beer is quite likely to listen to a new piece of music, too. The festival is like a “tasting menu” of new brews.

What do you like to do when you're not composing or organizing FFA?

I have a Harley. My most favorite thing to do is ride my motorcycle in the hill country.

Fast Forward Austin’s next event is Amid the Noise. It will take place on April 30th at 4th Tap Brewery in North Austin. For info about the schedule and performers, click here. And, it’s free!