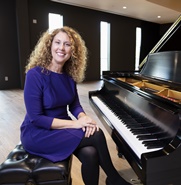 Carla McElhaney is the pianist, co-founder, and artistic director of Austin’s innovative chamber music and arts collective, REVEL (www.revelatx.org). Her playing has been recognized by the Austin Critics’ Table with nominations for performance awards in the “Best Instrumentalist” and “Best Chamber Music Performance” categories, praised by the Austin-American Statesman as exhibiting “infectious enthusiasm,” and commended by the Austin Chronicle as delivering “an exciting mix of focus and passion.”

Carla’s passion for music became evident early on; she gave her first public recital at the age of 3, and was a top prize-winner in numerous competitions throughout her youth. She continued her musical studies at the Eastman School of Music and The University of Texas at Austin. After graduating from UT with her Doctor of Musical Arts degree, Carla joined the piano faculty there and then went on to earn a tenured faculty post at Baldwin Wallace Conservatory in Ohio before returning to the fertile creative climate of Austin to co-create REVEL.

Carla is energized by creative partnerships, as evidenced by her active performing schedule and ongoing musical collaborations with many of Austin’s favorite musicians. She has been a featured guest artist with a growing list of ensembles and arts organizations, including Cleveland’s RED, the Mid-Texas Symphony, NYC-based F.R.E.D. Chamber Players, The American Repertory Ensemble, Chorus Austin, the Austin Chamber Music Center, Albuquerque’s Chatter, the Blanco Performing Arts Series, the Krotona Institute in Ojai, and the Credomatic Music Festival in Costa Rica. Carla currently serves on the music faculty of Texas Lutheran University and lives in Round Rock with her husband, Bryan, their children, Katie and Miles, and the family’s beloved Boston Terrier mix, Chelsea.