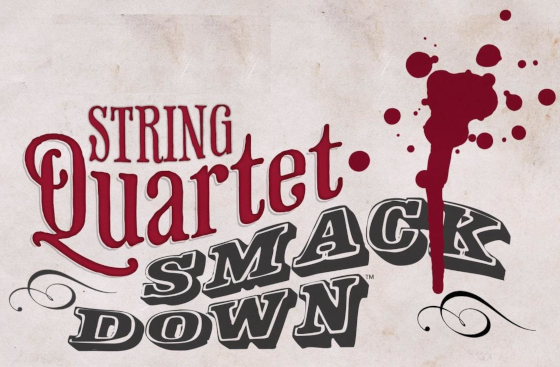 Golden Hornet has reached out across borders, oceans, and state lines to discover sixteen amazing compositional voices, and will now put them into a musical thunderdome.

String Quartet Smackdown V is the next installment of Golden Hornet’s classical battle of the bands. Taking place February 23 at Alamo Drafthouse South Lamar, the project is a community-affirming musical spectacle that features new works from regional and international composers. The pieces face off against one another in an NCAA-inspired bracket system, where the audience chooses the winner.

The idea for this classical battle royale came from, of all places, a board meeting.

“One minute we were casually talking basketball, the next we were back to business and planning our next season, and before you knew it the two conversations had merged,” recalls Golden Hornet’s Artistic Director, Graham Reynolds.

This year’s competition will be hosted by Graham Reynolds and Kate Murray of Golden Hornet. Photo credit: Golden Hornet

In the years since its inception, String Quartet Smackdown has presented dozens of pieces by composers from around the world. The submission process is wide-open, taking applications from all musical artists, irrespective of location, age, affiliation, or experience.

“Granting opportunity to all composers, rather than just those that are Western classically trained, is a key component of our entire mission, and is particularly important within this event,” says Golden Hornet’s managing director Kate Murray. “The genre can’t adapt to the 21st century without celebrating living composers of all backgrounds.”

This year’s finalists were whittled down from over a hundred submissions with the help of three guest judges, composers whom Golden Hornet chose based on their variance in compositional style: Maja S.K. Ratkje from Norway, Erdem Helvacıoğlu from Turkey, and the New York-based Eun Lee.

The sixteen contestants come from as far as Greece, China, Brazil, and Japan, just to name a few places. More than just contemporary and Western classical music, collectively their influences include everything from Ancient Greek music to K-Pop. This diversity of sound-practices not only assures a quality show, but also fits perfectly with Golden Hornet’s mission as a multidisciplinary organization that aims to help readapt composed music as we know it.

“We are rooted in both traditions, drawing lessons from each in search of a new model.”

The structure of the competition can be likened to a kind of musical speed dating. A single string quartet will perform all sixteen compositions in a seeded tournament bracket. For every bracket in the first round, the quartet will play just one minute of each piece, followed by a 45 second window for the audience to vote via text messaging, with the results appearing live on screen.

When the competition continues with eight compositions left in the quarterfinals, the quartet will play two minutes from each peace, and so on. The final round will feature the last two pieces played in their entirety. All the while, the composers of each work are kept anonymous to avoid any voter bias. 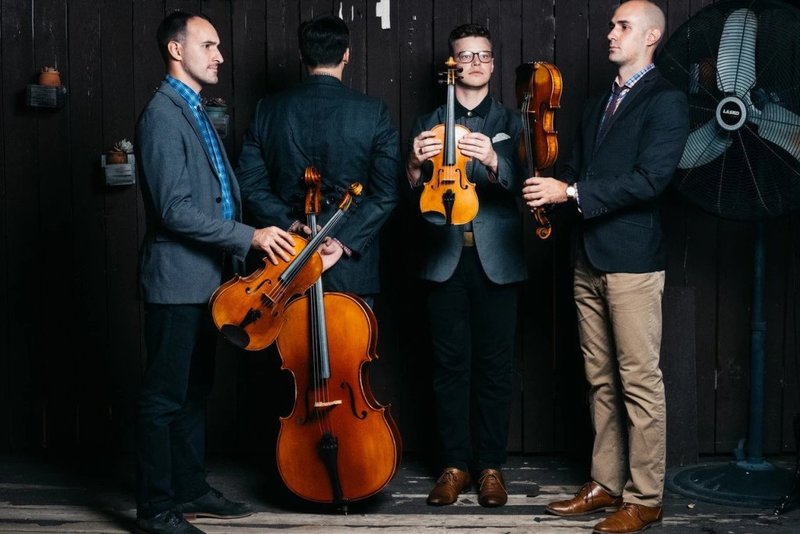 All compositions will be performed by Austin’s string quartet phenomenon invoke, marking their second year in a row as the in-house ensemble for String Quartet Smackdown.

“We have to give invoke so much credit,” says Murray. “This event could not be a success without a skilled quartet.”

In addition to learning all sixteen pieces (not to mention being able to shift between all the various excerpts at the drop of a hat), invoke will also spend two days in the studio to produce high-quality recordings for all the finalists to keep for their portfolios.

In creating a classical competition that supplants the usual pomp and circumstance with fun and revelry—and builds connections with artists from across the globe—Golden Hornet is helping to create new and lasting interest in composed music, and they’re having a great time doing it.

“I believe that with the right context and framing, people are ready to hear much more adventurous music than they might typically choose. From the hundreds of submissions we’ve received to this year’s final sixteen, I get to listen to new artistic voices from around the world,” Reynolds says.

“It’s hard to think of a better job than that.”